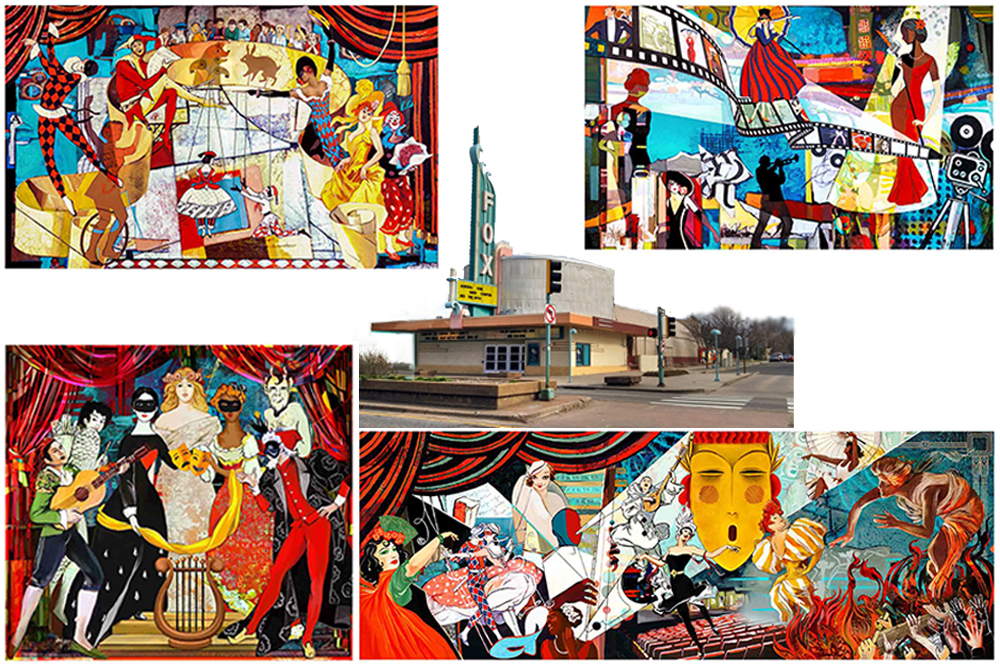 I was chosen to create murals for Aurora Fox Theater among two other artists. 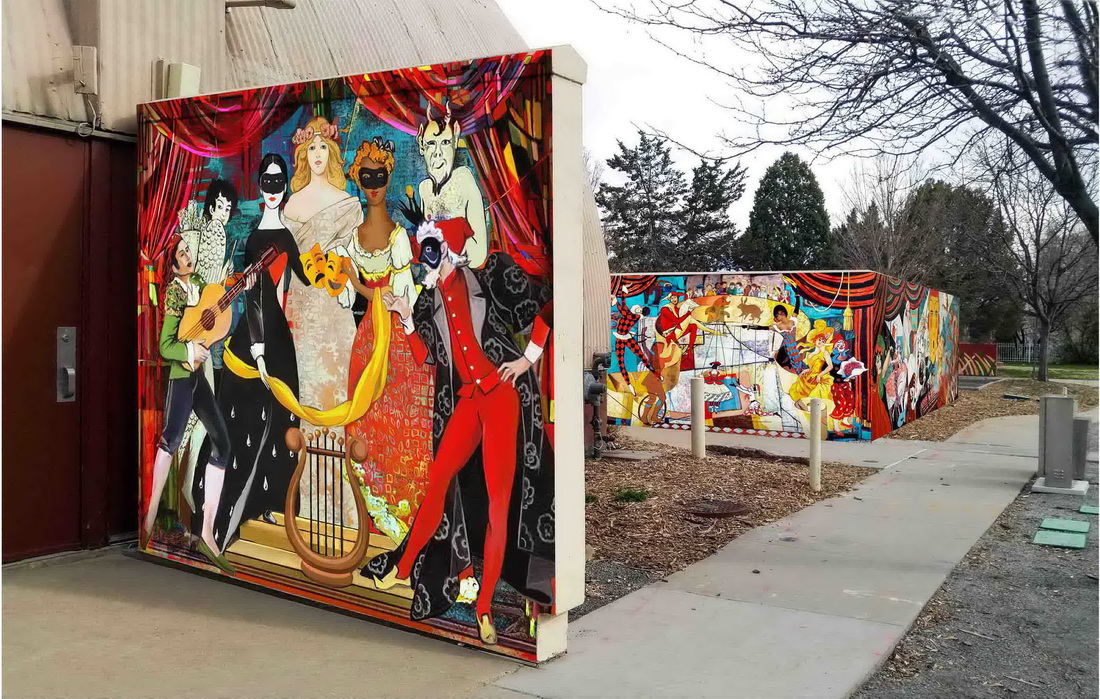 Four murals on four walls have a separate role in telling a story of the theatre. 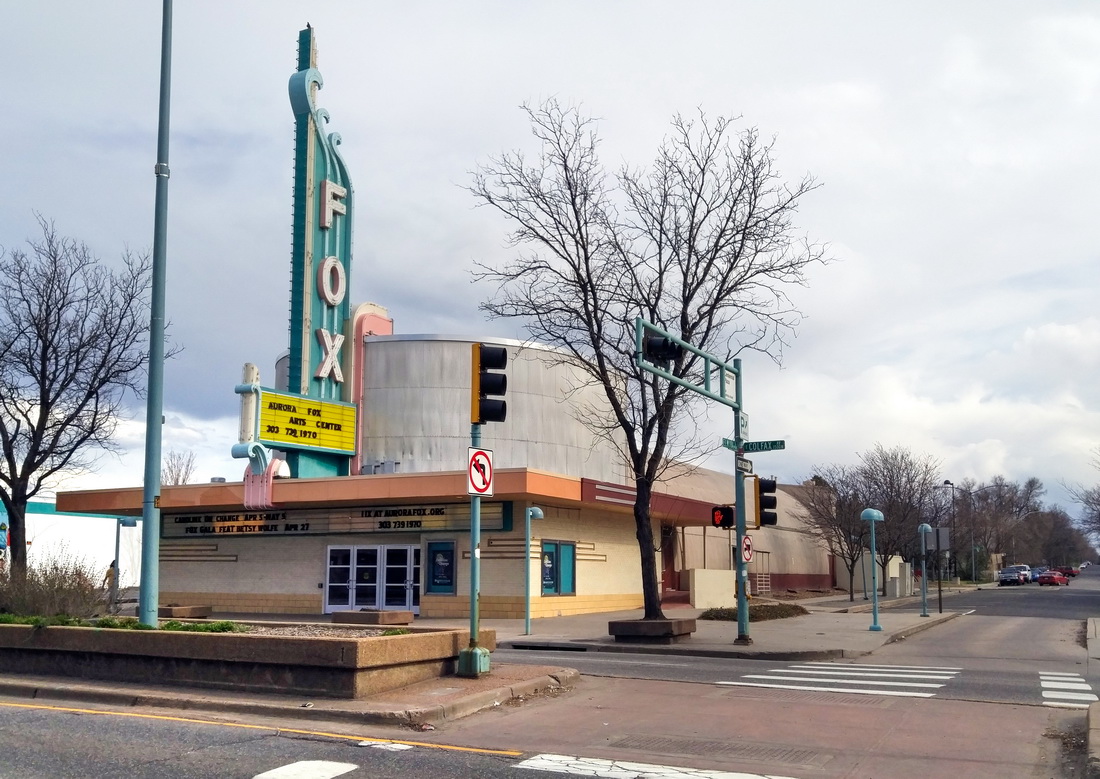 For this project, I decided to create a bright, vibrant and dynamic design. The murals will represent what is going on in the fox art center and its unique history. 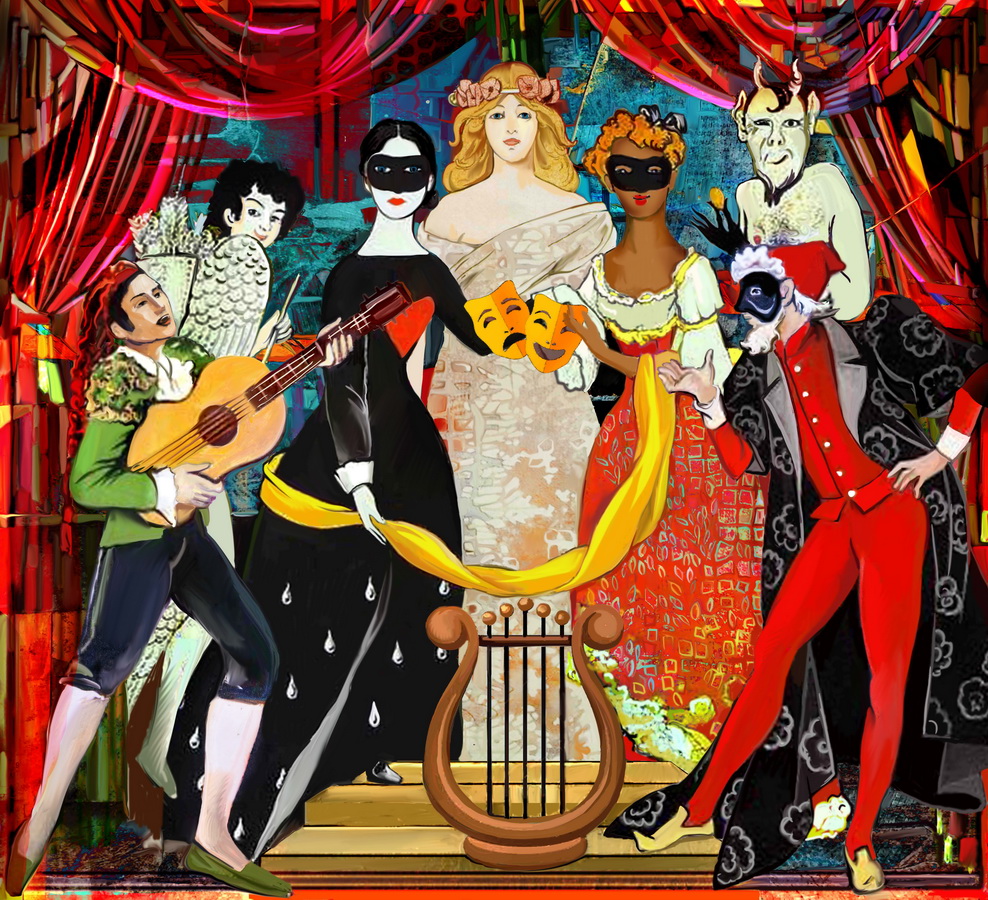 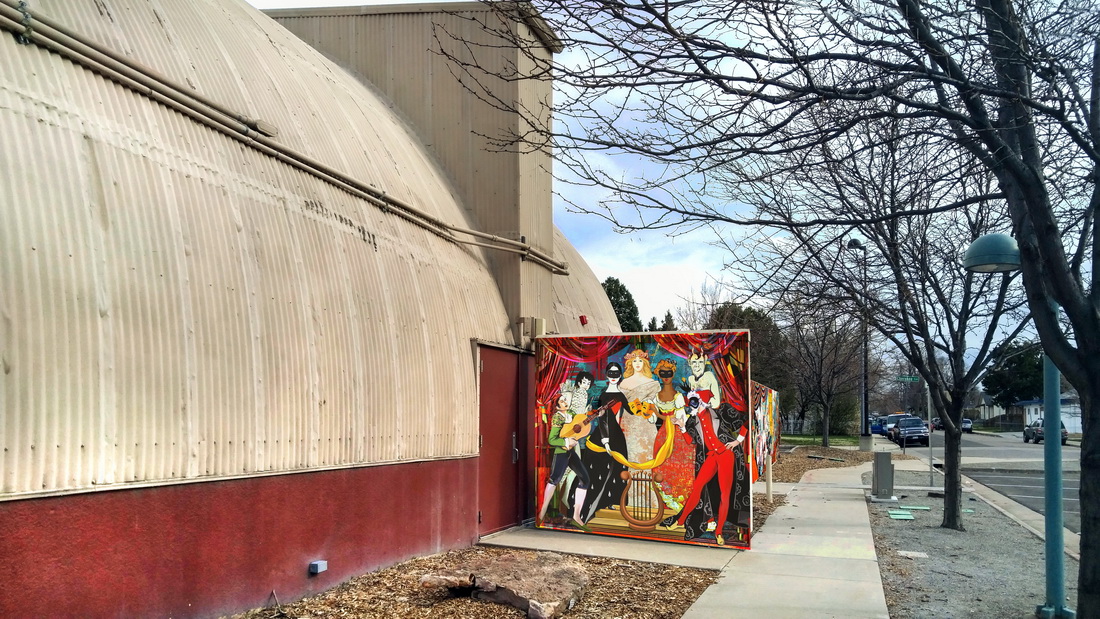 The 1st wall, that is facing Colfax avenue will greet people driving or walking by. The mural will help people immediately understand that it’s a drama theatre. Due to the lack of posters or ticket office outside of the building, other than a beautiful neon sign, it’s hard to know that it is a working theater and not an old movie theater. The mural is featuring a classic representation of the theater: a muse, patroness of the arts, a harp, theatrical masks, a jester and a cupid, devil, romantic serenade musician, and two ladies wearing masks. The mural design is framed with thick red velvet curtains, to emphasize the symmetric, staged composition. 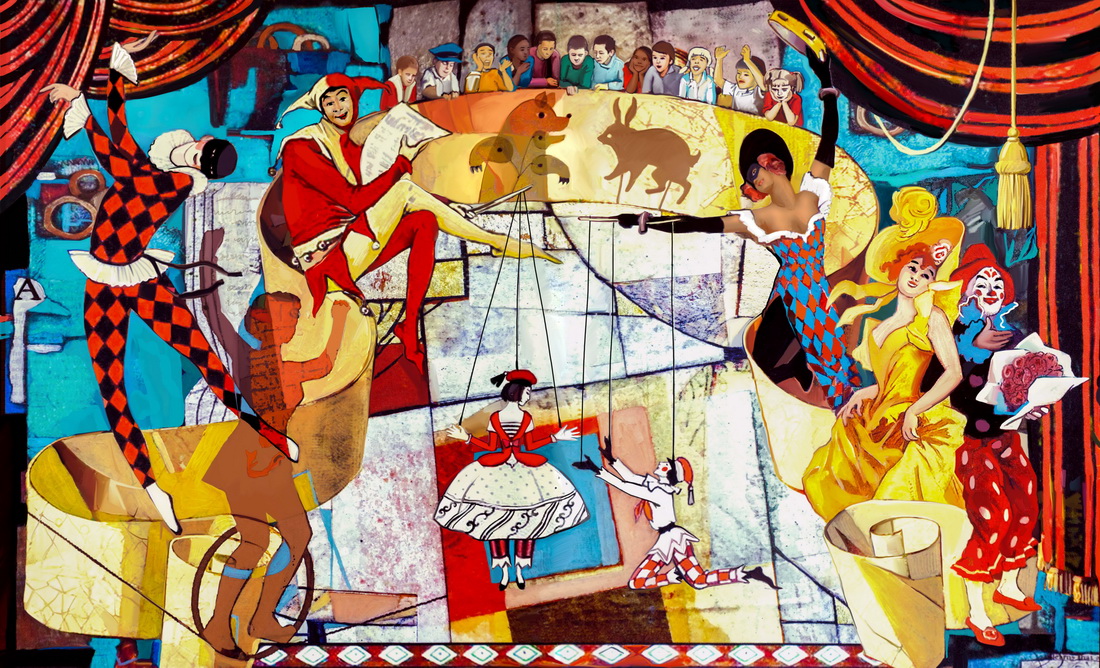 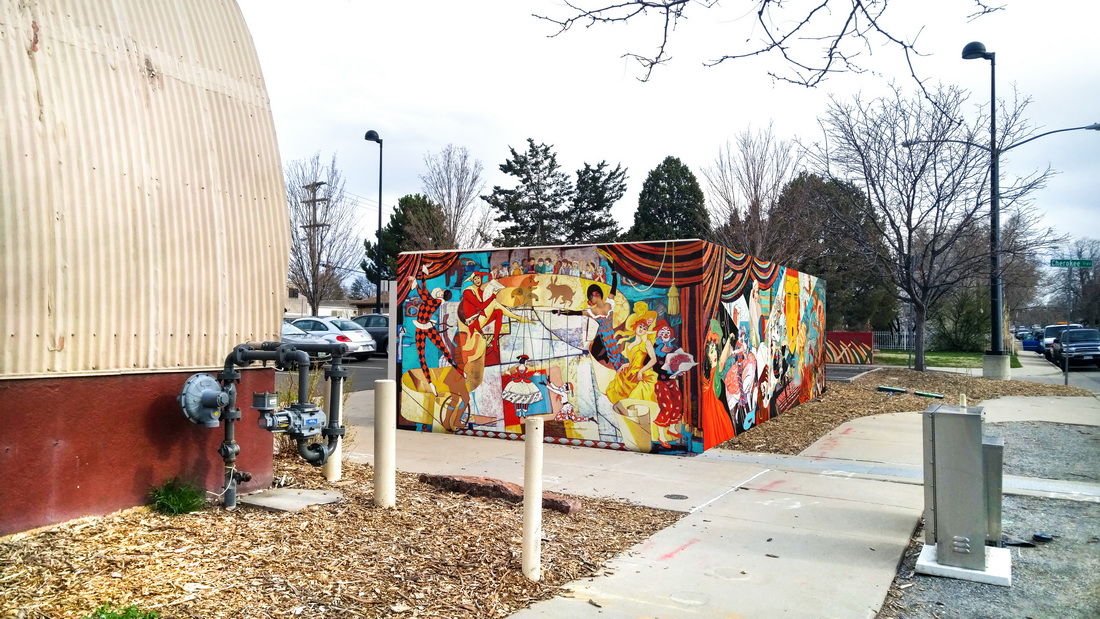 The second wall, north-facing side of the building is representing the children half of the theatre’s repertoire. A clown, jester, puppets, circus performers and of course a crowd of amazed children audience all united with a paper scroll, geometric stage sets, and striped curtains. 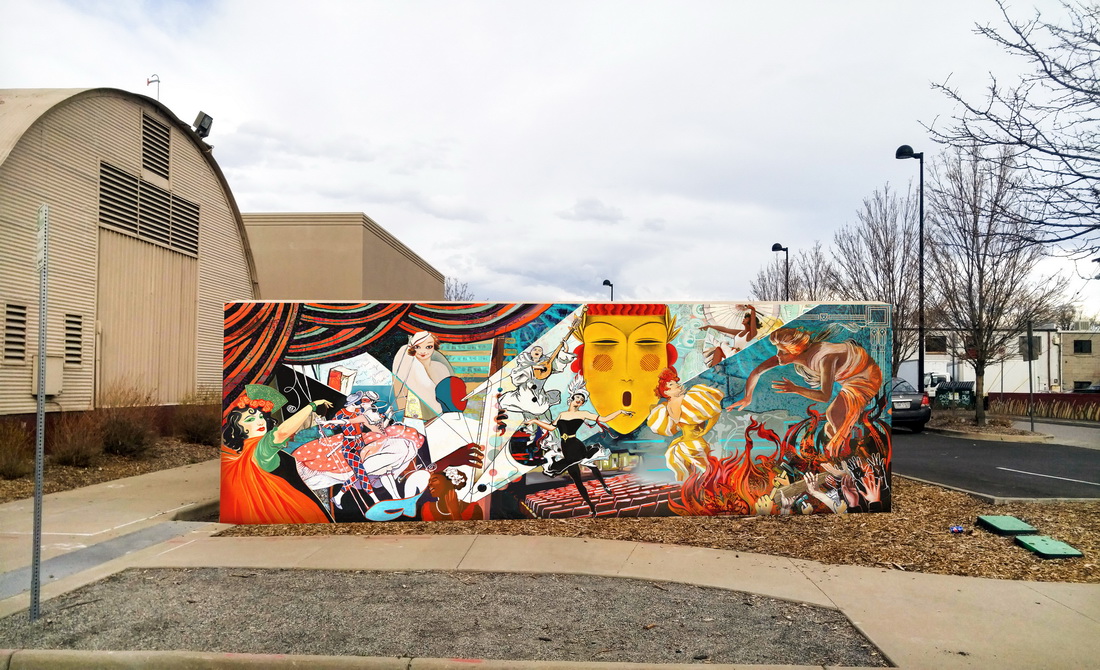 The third mural wall is telling a story about the fire, that damaged the building in 1981 and it’s rebirth from the ashes with the help of the community. On the right side, you can see the red flames of fire in the theater. The muse of theatric arts is helping to stop the fire, together with the hands of ordinary citizens, who, with hammers, building materials and paints rebuilding their beloved theater. This wall shows the invincible power of art. Dancers, performers, and actors are celebrating the reopening of their theater with theatric performances. Fun, joy and creative energy overwhelm the stage. 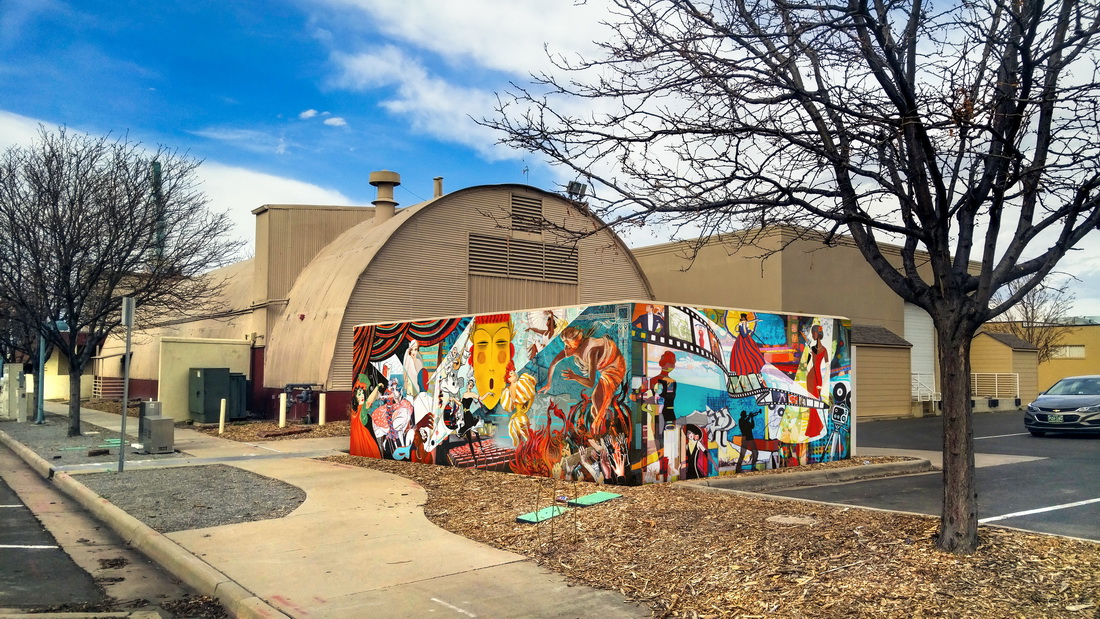 Saddle elements of art deco support the main style of the building’s architecture.

Here, as everywhere throughout the mural colors are bright and vibrant. Rich reds echo with red paint on the theater walls, yellow and blue from the neon sign are the other two main colors on the mural designs. Contrast and saturated tones convey the atmosphere of the theater. Exaggerated emotions, dynamic gestures, grand clothes show the energy and ambiance of the theater. 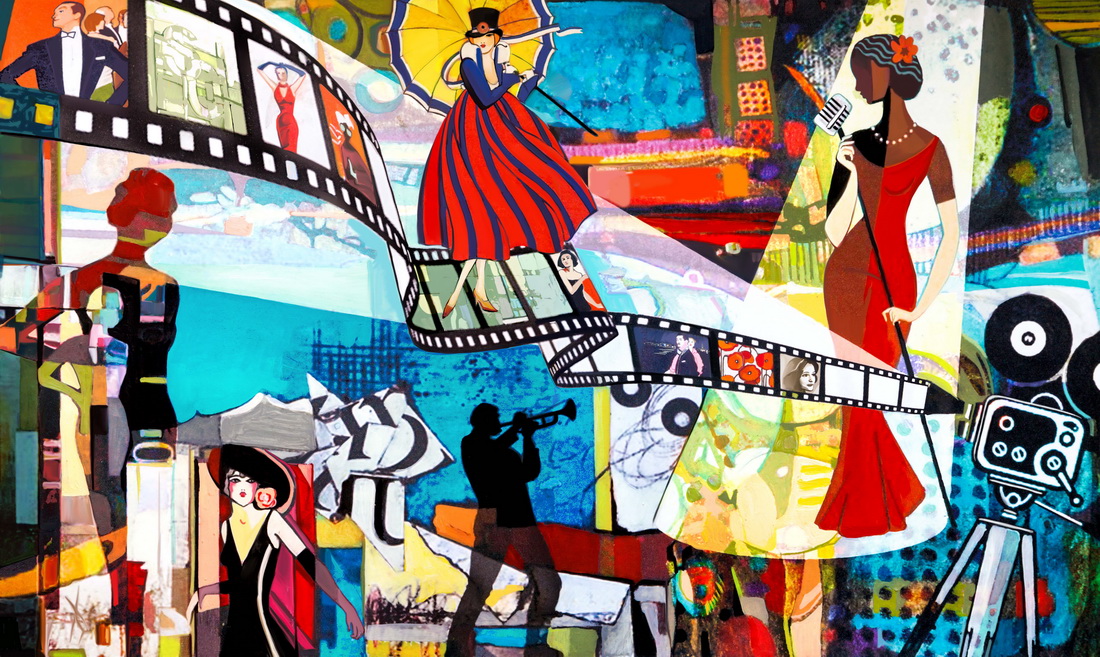 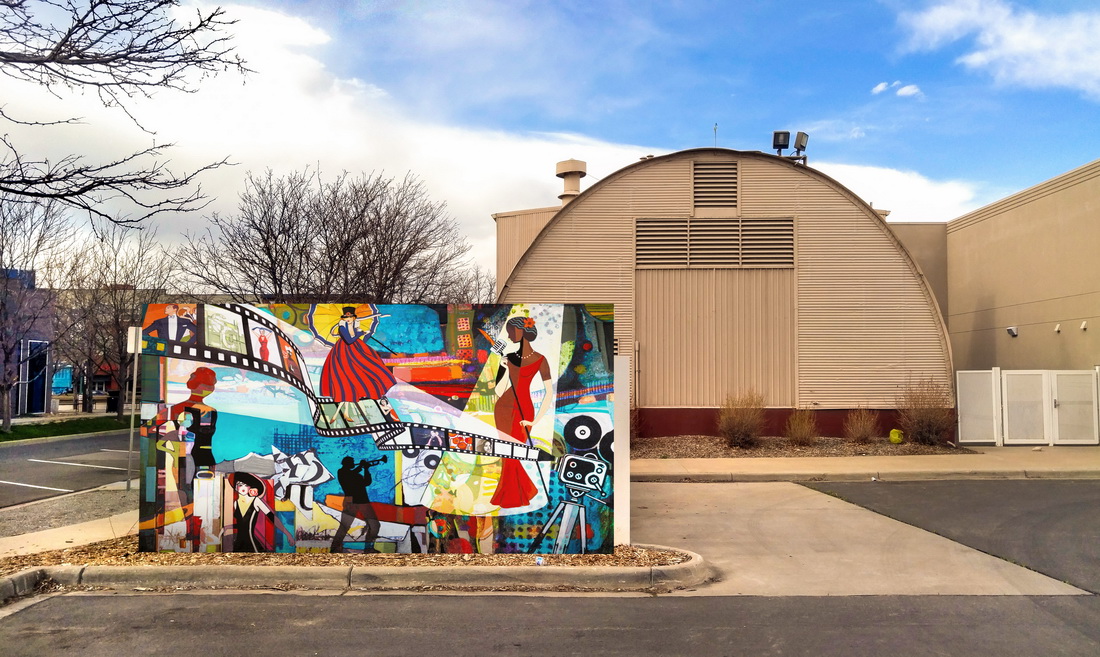 And the fourth wall goes back into the pre-fire history of the theater. Though made in the same color scheme and style, this composition has a more retro ambiance. Featured characters have 50’s and 70’s clothing. The film tape shows frames of the old movies.

These murals for Aurora Fox theater will create the dramatic atmosphere of the theater and welcome visitors, acquaint people with its history and invite them to see a play.

All the images, Photoshop mockups were presented before art commission in Aurora on May 22nd, 2019.